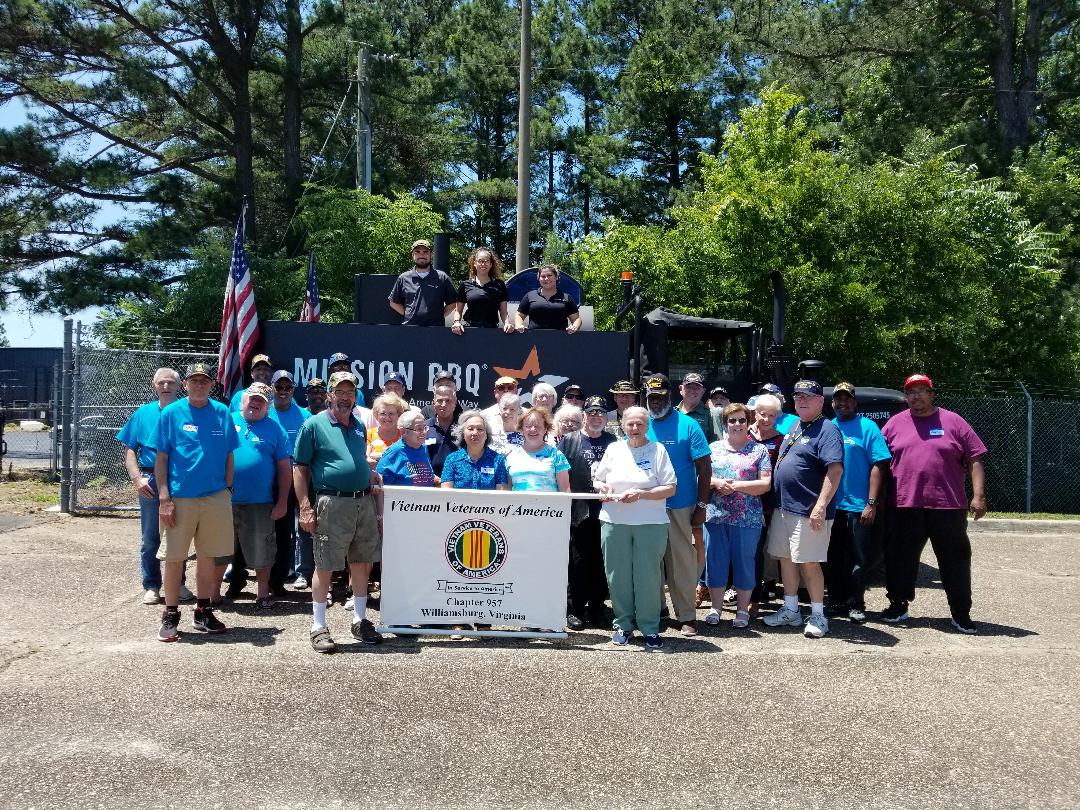 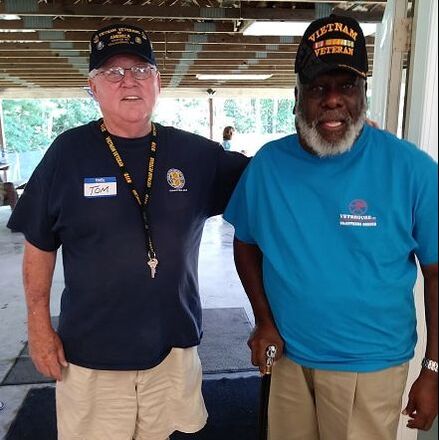 Members of Chapter 957 entertain homeless veterans from VetsHouse, Inc at our annual picnic on June 15th, 2019 at the Dominion Energy Community Bldg. on Ironbound Rd , Williamsburg. Food was supplied by the very patriotic Mission BBQ company. ​

​VetsHouse, Inc ( one of the many charities supported by the Chapter) is located in Virginia Beach and runs a program to help homeless veterans get back on their feet. They currently operate 5 homes for men and one for women. The Director, Willard Smith is pictured on right with the Chapter President, Tom Monahan.
​

Members of Chapter 957 welcome some twenty patients from Maguire Veterans Hospital in Richmond for a tour and lunch at the Jamestown Settlement on Friday, June 7, 2019. This event is held annually by the Chapter to entertain these deserving individuals and to show them that we appreciate their sacrifice for our Nation. The patients are accompanied by nurses and rehab personnel as well as tour guides from the settlement along with members of the Chapter as chaperones.  It was a very rewarding day for all. ​
In addition to the above, the Chapter also participated in many other Memorial Day activities. The Chapter helped place over 1200 flags at Veteran's grave sites at the Williamsburg Memorial Cemetery, held a fund raiser Friday & Saturday at the Monticello Branch of the Post office and participated in the annual ceremony at the cemetery which was attended by nearly 400 people. The event is hosted by Williams Memorial Cemetery and by the Combined Veterans Organization Council of Williamsburg.​

By Sean CW Korsgaard Staff writer Virginia Gazette, March 30, 2019
​https://www.vagazette.com/news/va-vg-vietnam-veterans-day-0329-story.html
For some of the men and women gathered at Veterans Park Friday morning, it had been more than 50 years since they had put on the uniform. Gathered together to mark Vietnam Veteran’s Day, none of them have forgotten their experiences serving in the Vietnam War.

“A lot of these men, they weren’t exactly welcomed with open arms when they came home from Vietnam, and there are still a lot of Vietnam veterans who won’t come out and talk about their service because of the homecomings they received,” said Jim Icenhour. “That's part of why events like this are so important.”

Icenhour, chairman of the James City County Board of Supervisors, was one of several local officials on hand to give each veteran a 50 Year Vietnam War Commemorative pin, along with a handshake and thanks for their service. Icenhour, a former Vietnam War fighter pilot with almost 200 combat missions under his wings in the Air Force, knows a little recognition goes a long way.
“It’s important that we honor the men who serve this country, in the Vietnam era, that just didn’t happen,” Icenhour said. “As a community, and especially a community with as many veterans as Williamsburg, we owe them that and so much more.”

Others in attendance came to remember friends lost during the war.
George Bull served in Vietnam as a Captain in the Army from 1965 to 1970. He was wounded during a night attack in 1970, for which he received the Purple Heart. That same attack also killed more than a dozen other soldiers, including his college ROTC instructor.

“Something like this is very special, not just for the guys here today, but for all of our friends who never made it home,” Bull said. “A lot of us didn’t get any recognition after the war, but a lot of our guys never had a chance to be recognized at all, and we owe it to them to remember them today.”
Last year was an important milestone for the 50 Year Commemoration. The deadliest year of the Vietnam War was 1968, with 16,899 Americans killed in action and the anniversary of several key events, including the Tet Offensive and the end of Operation Rolling Thunder.

That sense of history matters, according to Clyde Spence, a retired Army major general who saw action in both Korea and Vietnam.

“We have a nasty habit of forgetting history in America, especially history that makes people uncomfortable, or which we disagree with,” he said. “People gave their lives in this war, we have to make sure they’re remembered, even if it makes us uncomfortable. Perhaps then most of all.”

Tom Monahan, president of Chapter 957 of Vietnam Veterans of America, which helped organize the ceremony, said he was encouraged by the strong turnout and hopes it will grow larger in the next few years.
​
“A lot of these men, they fought and died in a very unpopular war, and I know of people who still call us baby killers even after all this time,” Monahan said. “It always was a damn shame, and I’m very glad that, on a day like today, our Vietnam veterans are finally being recognized for the service they did for this country.”


Jim Icenhour, Chairman of the James City County Board of Supervisors, and himself a Vietnam veteran, takes the time to shake hands and say a few words with every attending veteran. (Sean CW Korsgaard) 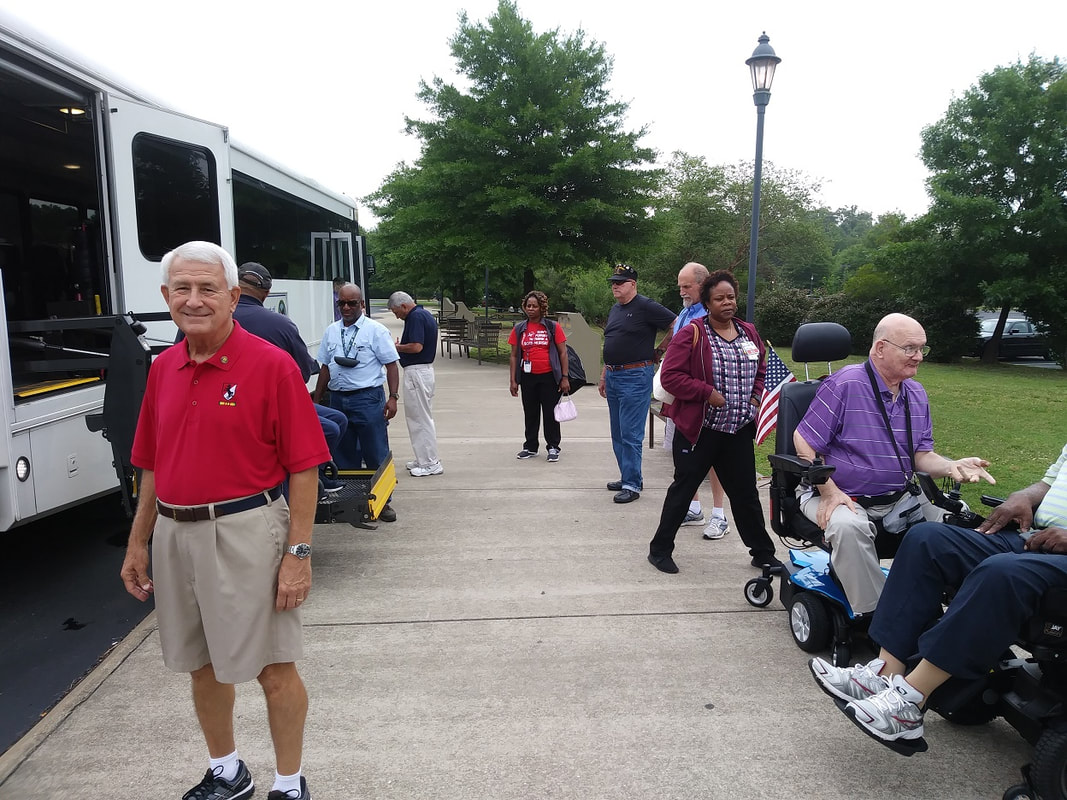